Hearing Aids were a Pioneer in Electronics Miniaturization 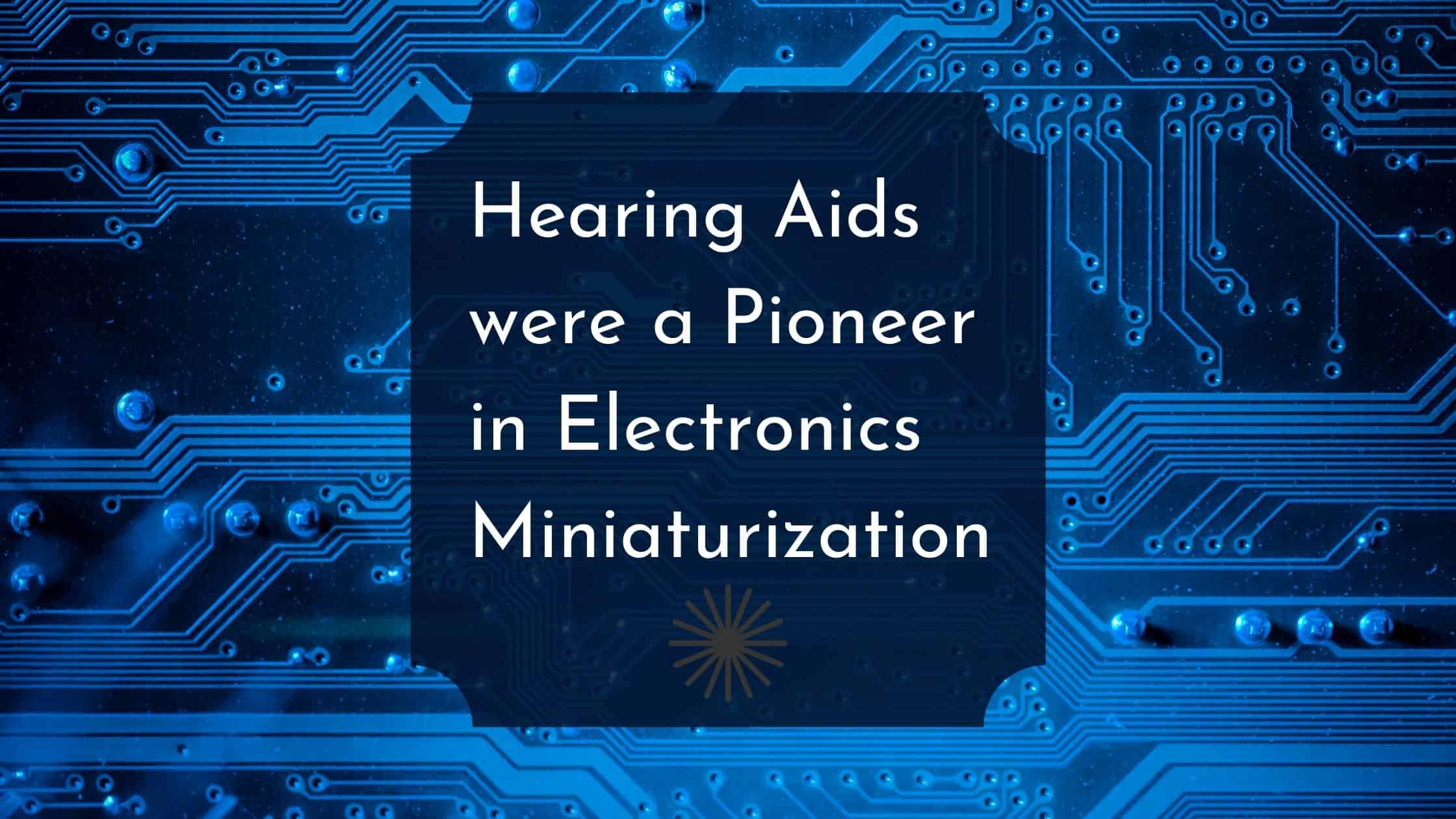 It was just the early 1940’s when the first fully functional computer, known as the Harvard Mark I was invented. This machine was more than 50 feet long, weighing five tons, and consisting of about 750,000 mostly mechanical separate parts. It’s amazing how far we’ve come in just over seven decades. Today we can carry computers in the palm of our hand, as in the case of a smartphone. Some computers are so small they fit in or around our ear canal, in the form of hearing aids! Amazingly, we actually have the needs of the hearing impaired to thank for some of the most important advancements in the militarization of computers.

A hearing aid must be small enough to fit in or around the ear comfortably and this has inspired advancements which have allowed us to enjoy Smartphones, fitness trackers, Smartwatches and more, with enhanced accuracy, power, and speed. Hearing aids have to amplify hearing from the time you wake up till the time you go to sleep. This requires a lot of extended battery power, as well as nuisance of sound amplification. To see how far hearing aids have come, lets explore some of the crucial moments in the development of hearing aids which paved the way for the militarization of electronics which are pervasive in so many aspects of daily life around the world.

Hearing Aids Prior to Miniaturization

Early hearing aids were simply ear trumpets, but It was in 1898, when Miller Reese Hutchison invented the first electric hearing aid, which used an electric current to amplify weak signals. By 1913 the first commercially manufactured hearing aids were available for purchase. Prior to WWII, electronics were too big to be worn in the outer ear, however it was the use of transistor radio’s during the war which enabled portability in electronic hearing aids. In fact, it may have been the stigmatization of hearing loss, which led to a higher demand for tiny devices that would be less obvious to the eye in hearing aids. Transistors allowed this need to become widely available around the world.

A transistor acts as an amplifier by raising the strength of a weak signal. Previous to this, electronics were reliant on high-voltage circuits to operate, which required a greater size and power. In 1947 John Bardeen and Walter Brattain at AT&T’s Bell Labs in Murray Hill, New Jersey investigated the power of conductors which made it possible to produce an output voltage that was greater than the input voltage. In collaboration with Physicist William Shockley, who theorized that it would be possible to develop “transresistance,” which could affect amplifying voltage rather than limiting it, transistor technology became a standard in electronics. This paved the way for the possibility of amplification in hearing aids.

Compact Assembly and the Integrated Circuit

The basics of hearing aids that we know today consist of a microphone to pick up sound, a receiver to amplify it, a power source, and a speaker to send the signal to the ear canal. While transistors made it possible for hearing aids to become more compact they still had a long way to go. Today’s hearing aids are small enough to fit around the outer ear or even in-ear canal, allowing them to be compact enough to be functional and discrete.

Microprocessors in hearing aids read the microphone’s digital message and customize what is amplified. It gives hearing aids the nuisance to be individualized for each person’s particular manner of hearing loss.

There are so many new developments in hearing aids, such as Bluetooth connectivity, artificial intelligence, background sound suppression, and tinnitus masking. Hearing aid technology continues to push the boundaries of what we believe could be possible. If you wear hearing aids or think you could benefit from trying them, don’t delay in contacting us to find out all your options!

As we discussed previously, long term untreated hearing loss can have profound physical, mental, and emotional effects for seniors. But there is substantial evidence that taking steps to improve our hearing will go a long way to ensuring our physical and mental well-being as we age. We are living longer, healthier and more actively than our parents generation. We take care of ourselves, and we refuse to sit on the sidelines of life. Since we are living longer, we certainly want to age well, and our generation (the Baby Boomers) tends to “take the Bull by the horn.” But it’s important to understand that we don’t treat hearing loss just to hear with more clarity. We treat hearing loss to improve our quality of life, and the longevity of that quality! Addressing and treating hearing loss can be a long, sometimes challenging process, but most of us are up to the challenge. There are many benefits to treating our hearing loss. Here are just a few: