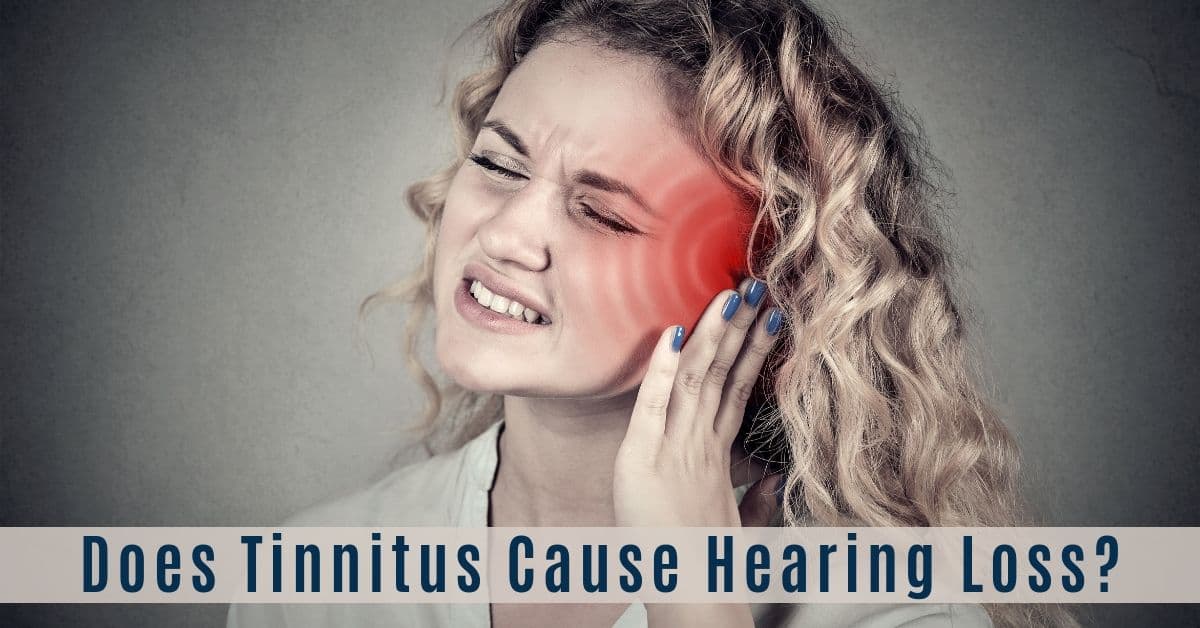 If you have ever been to a loud concert, you might recall the experience of going home, laying your head on the pillow in the quiet of the night, and suddenly hearing a loud high-pitched scream in your ears. If you have experienced that sound, you can relate with someone who has tinnitus. Most people who suffer from ringing in their ears after a loud event such as a concert will find that it goes away very quickly, even by the morning after the event. However, a person with tinnitus finds that the sound does not go away. That inescapable sound, whether it is ringing, buzzing, whirring, clicking, or another ongoing noise, can be associated with other negative health outcomes, including stress-related conditions.

Although tinnitus can lead to other health problems, such as insomnia, anxiety, or depression, it is not a direct cause of hearing loss. However, the same noise-related event can cause both hearing loss and tinnitus. Although the two conditions resemble one another in some ways, they are quite different. Hearing aids can offer treatment for both conditions, but that treatment looks quite different, as well. Let’s take a look at the differences between these two hearing conditions, as well as the treatment options that are available.

When a person incurs hearing loss, it can take many forms, and the causes are as varied as the individual experiences of loss. The most common form of hearing loss occurs when the tiny hairs of the inner ear are damaged through sound exposure. The hairs most likely to be damaged are those responsible for detecting sound in high frequencies, making it difficult to hear the human voice in conversation. Tinnitus similarly can be caused by exposure to loud sound, yet it leads to a different hearing experience. Rather than becoming completely ineffective, those same hairs let some sounds “leak” through when they become bent or broken. The resulting ringing, squealing, buzzing, or crunching sounds of tinnitus are distortions of what a person might otherwise be able to hear. Tinnitus does not cause hearing loss, but they are both caused, in many cases, by damage to the tiny, delicate hairs of the inner ear.

When tinnitus is ongoing, the condition can be infuriating, creating a seemingly inescapable sound that plagues the mind. The good news is that treatment is possible! Hearing aids do not only amplify sound for those who have hearing loss, they can also emit sounds that sooth tinnitus. One of the ways that hearing aids can be used to treat hearing loss is to use a phenomenon of sound to cancel out the troubling sound of tinnitus. Sound occurs in a wave pattern, and you can imagine the simplest sound wave to be a sine wave, equally shaped and symmetrical. If an identical sound is emitted at the same time as a sine wave, yet slightly separated in time, the sounds can cancel one another out, a phenomenon called phase cancellation. This principle of the physical world can be used to make a person with tinnitus feel as though the ringing in the ears is not there at all. One of the problems of tinnitus treatment is that those troubling sounds are seldom as simple as a symmetrical sine wave, and devising a cancelling sound can be difficult. Although developments are ongoing in tinnitus treatment, hearing aids are able to deliver sounds that offset or ease the sounds of tinnitus. Those same devices are used with remarkable success to treat hearing loss. Amplification of sounds has become so precise that the wearers of hearing aids can now hear a single voice in a noisy room, even when that voice is quieter than the surrounding environment. Incredible!

If you suffer from hearing loss or tinnitus, a visit to Pacific Northwest Audiology is the first step in the direction of treatment. After a hearing exam and consultation, we can describe to you the range of treatment options that can reduce or even erase the problems you face. Why not take the opportunity to contact us right away? Whether you seek treatment for hearing loss or tinnitus, you will be amazed at the improvements to your life!