Board Certified Doctors of Audiology!
We are the hearing experts and we know hearing loss!

What is Noise-Induced Hearing Loss?

Noise induced hearing loss (NIHL) is irreversible hearing damage resulting from continuous exposure to high levels of noise. NIHL affects an estimated 10 to 15 million people in the United States, making excessive noise exposure the most common cause of hearing loss.

NIHL can be caused by a sudden intense sound, like an explosion, rifle shot, or firecracker, or by continuous exposure to loud sounds over an extended period of time. Repeated exposure to sound levels greater than 85 dBA can damage the hair cells in the cochlea of the inner ear, and also the nerve fibers that relay sound to the brain for processing.

What Are the Symptoms of NIHL?

Symptoms of NIHL increase gradually. Over time, sounds may seem distorted or muffled, and it may become increasingly difficult to understand speech. Someone with NIHL may not be aware of their hearing loss, but a hearing test can divulge the problem and promote early treatment.

Who Is Affected By NIHL?

People of all ages can develop NIHL. More than 30 million Americans are exposed to hazardous sounds on a regular basis. About one third of the 28 million Americans with hearing loss likely developed NIHL from noise at work or leisure activities. Noise is one of the most common occupational health hazards, and NIHL is the main concern in industrial, manufacturing, entertainment, and farming environments.

The Progression of NIHL

NIHL is a hearing disorder characterized by gradual, progressive high frequency hearing loss, due to harmful noise exposure. The audiogram (right, adapted from ANSI S3.44-1996, and the Better Hearing Institute, Prevention of Hearing Loss from Noise Exposure) illustrates the typical progression of NIHL after daily averaged exposure to noise levels of 95 dBA for white men at ages 20, 30, 40, 50 and 60 years with 0, 10, 20, 30, & 40 years of cumulative noise exposure, respectively. An audiogram is a graphic record of an individual’s minimum hearing sensitivity for various sound frequencies

As NIHL progresses, the hearing loss may eventually spread to frequencies where human speech is pervasive…in the range of 500-3000 Hz. If NIHL becomes pervasive in this region, understanding speech will become difficult. 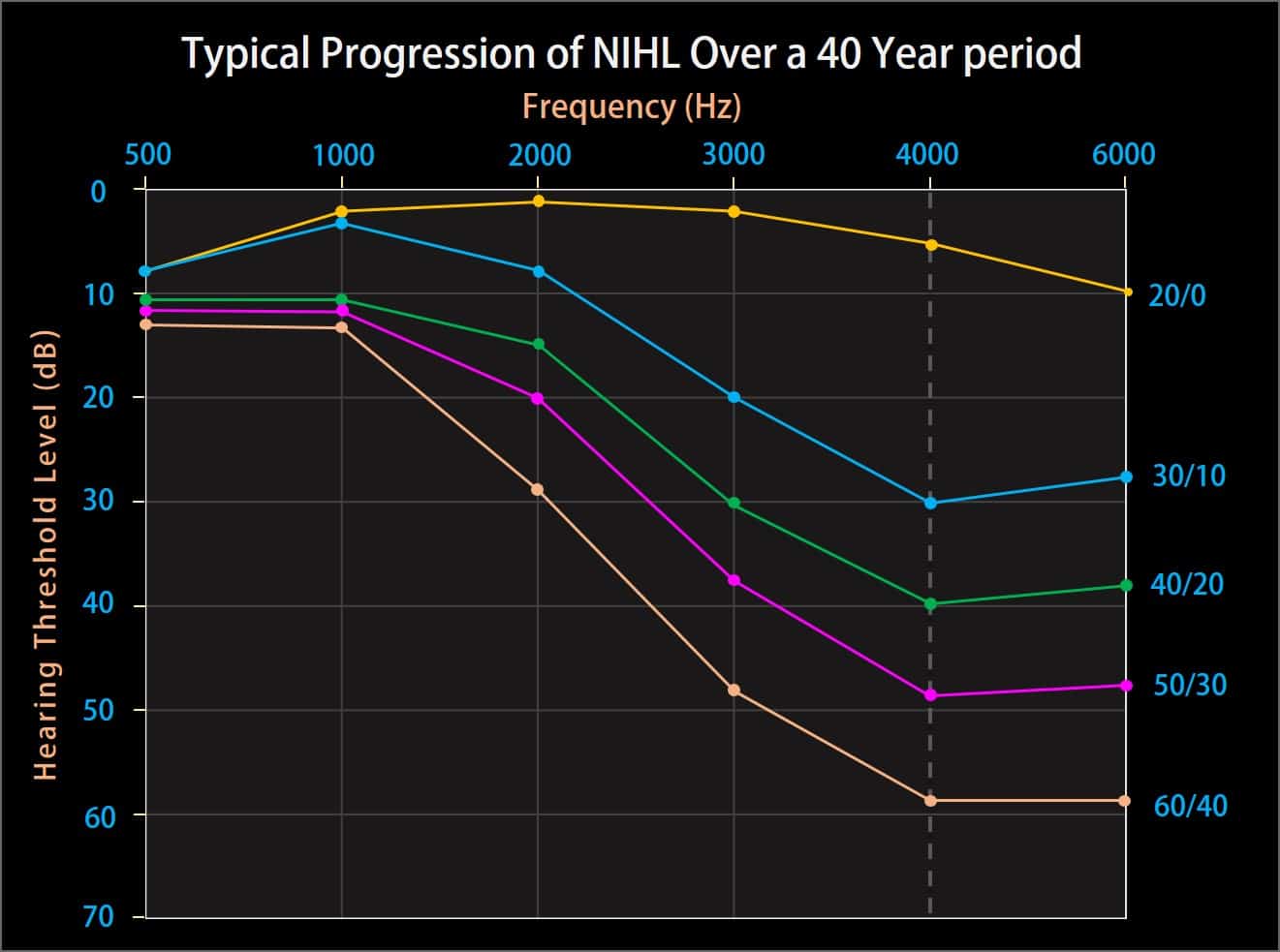 The following figure (below) is from a peer-reviewed research paper by Dr. Li: Genetic influences on susceptibility of the auditory system to aging and environmental factors.

The left panel (A) shows healthy hair cells, but (B) shows noise-induced damage, indicated by fused hair cells (yellow arrows) and scars (white arrow). The damaged hair cells in (B) were subjected to noise exposure of 120 dB for just 5 minutes!

The sensory hair cells lining the cochlea are extremely sensitive to noise. Once they die, there is no coming back…the damage-caused hearing loss is permanent!

But why should you trust us?
Here is what our patients say...

State of the Art Technology
I am 71 years old and never had a hearing test. Dr Li is so caring and professional. I must admit I learned so much from the audiology evaluation. Technology is outstanding! Dr Li shared the visual results and explained in depth. We take care of our teeth and eyes but now I have great appreciation for hearing. ... C. K. Bend OR
Very Knowledgeable
Dr. Benner is super sharp and knowledgeable of all things hearing aids. I highly recommend using her.
M. O. Bend OR
Knowledgeable, Experienced, Trustworthy
Two of the most important things to look for in a hearing professional are competence and trustworthiness and Pacific Northwest Audiology scores well on both. I have been with them since 2015 and have achieved fantastic results. None of a hearing aid's bells and whistles will matter if they aren't programmed properly for your ears. PNW Audiology's level of service makes a big difference.... A. M. Bend OR
Previous
Next

Are you ready to Hear What You Are Missing?