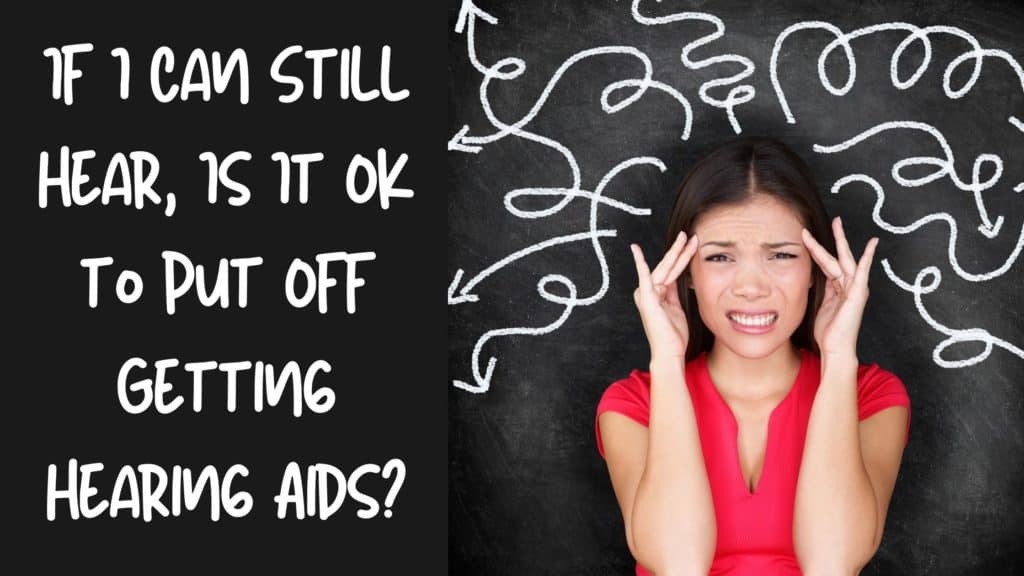 If I Can Still Hear, Is It OK to Put Off Getting Hearing Aids?

Hearing loss affects a vast number of older adults. Around one in three people between the ages of 64 and 75 report hearing loss. And it’s a number that leaps ahead as the year’s progress — almost half of the folks over 75 have difficulty hearing. Alarmingly, it’s the listening habits and subsequent hearing damage of our youth that have recently made headlines.

If you have mild hearing loss, you might be wondering if you can put off hearing aids a little longer, but that might not be the best idea. A recent study from researchers at the Ohio State University has found that young adults with even minor hearing loss have brain activity patterns during listening activities typically only seen in old age.

It’s an unsurprising fact; look in any office at the number of young people who use music or podcasts listened to on headphones to complement their workday. While it may be favorable to pass the time and increase focus, the danger is imminent.

This isn’t a problem regulated to the United States; the World Health Organization (WHO) has raised alarm bells over global listening habits. In 2015, they released a statement warning against dangerous noise exposure due to the unsafe use of personal audio devices, including smartphones. The WHO estimates that some 1.1 billion teenagers and young adults are at risk of permanent hearing loss.

Early hearing loss and the link with dementia

The study showed similarities in how young adults with mild hearing loss show similar brain activity to older adults with hearing loss during listening activities that impacts more than just future hearing health. Lead researcher Yune Lee cautions the public to think about the further-reaching consequences — the impact hearing loss at a young age might have on the occurrence of dementia down the road.

There is already a strong link between hearing loss and dementia, likely because much of what we perceive as listening occurs in the brain while our ears receive sound. “We can’t be sure,” says Lee, “but we suspect that what happens is you put so much effort into listening you drain your cognitive resources, and that harms your thinking and memory and that can eventually lead to dementia.”

The best way to protect your hearing now is to pay attention. That means monitoring the volume that your devices are consistently set at. If you can’t hear external noise occurring around you, turn your volume down. You’ll also want to note the volume in your car when you’re riding with a passenger. When you can carry on a normal conversation, that’s the volume your stereo should be set at.

Pay attention to the listening environments you find yourself in. Sure, the front row right by the speakers seems like a good idea in the short term, but the long-term effect might be a heightened risk of dementia. Carry a pair of earplugs with you so that you don’t have to skip the event or the great seats. And no band on earth is that good! Still, you can ensure an additional barrier between you and dangerous noise.

Get a hearing test today

If you suspect that you may have hearing loss, the best step to take is to confront the issue by scheduling a quick and easy hearing test. Our hearing professionals are trained to give you a reliable diagnosis and a plan to move forward with intervention or treatment. This is one of the only ways to potentially interrupt the hearing loss/dementia connection. Contact us today!