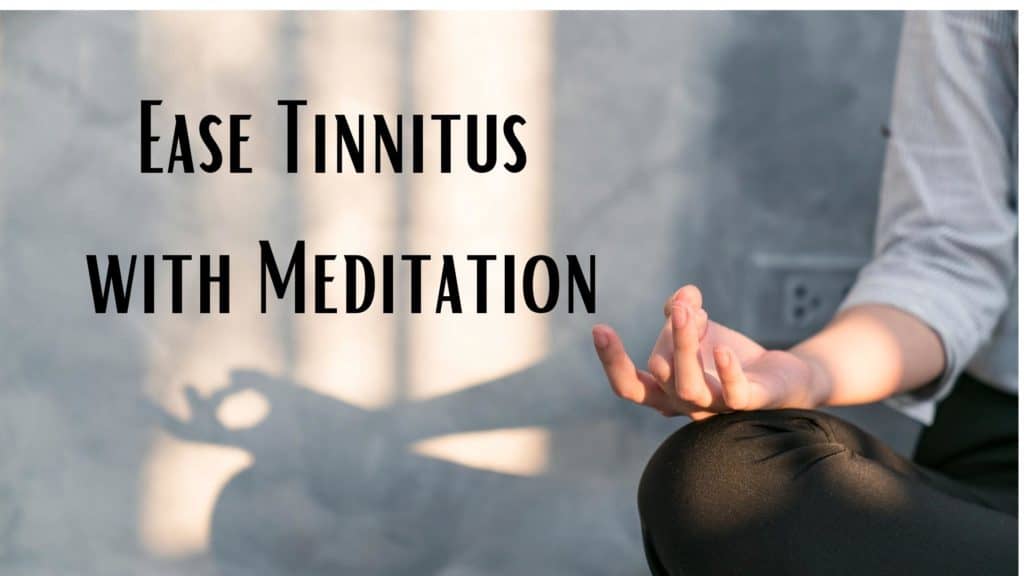 Those with chronic tinnitus will be familiar with the mental toll it can take. Particularly when we find ourselves in a quiet environment, such as while trying to fall asleep at night, the sound of ringing, buzzing, whirring, clicking, humming, or whistling in the ears can be the only thing on our minds. Many find that this experience of hearing a sound without a source outside the body to increase frustration, anxiety, and even depression.

With these facts in mind, it might come as a surprise that meditation can be used as an effective form of treatment. Why would people with tinnitus subject themselves to a quiet environment? On the first attempt, many people with tinnitus do indeed struggle to meditate, but many have found that sustained practice helps them habituate to the ongoing sounds they hear.

Although there are many methods, mindfulness meditation can in fact be a source of relief rather than added frustration.

Although experiences of tinnitus differ from person to person, the general experience is a sustained sound that does not have an origin outside the body. What does that mean, exactly? In one case, a person with tinnitus might be hearing a sound made by parts of the body close to the inner ear, such as circulation or a bone growth.

More commonly, tinnitus results from bent, broken, or otherwise damaged stereocilia, those tiny hairlike organelles that detect sound vibration in the inner ear. In some cases, damaged stereocilia make it impossible to hear a sound in that particular frequency, but sometimes that damage in effect turns the receptor “on,” making the sensation of sound constant. That ongoing sound quite often sounds like a ringing noise, and its persistence can cause undue stress and lack of focus.

Among the many forms of meditation practices, most share in common the sustained act of focusing attention on one aspect of experience: breathing, sensations in the body, a repeated word or phrase, or an image. The transformative effect of meditation does not come from being able to clear one’s mind of all thoughts or to think of one thing for many minutes on end. On the contrary, the practice of mindfulness is a commitment to return one’s mental attention to the object of focus each time thinking wanders away. Master meditators still face distractions and thoughts that get in the way of focused attention, but they are lightning quick at returning focus to that object of focus.

Those who use meditation as a treatment for tinnitus usually struggle with the quiet environment at first. The sounds of a quiet room can feel even louder than a noisy place with a variety of sonic events.

One tactic that some people will tinnitus have found effective is to use that sound as the object of focus. Rather than trying to ignore or escape the sound of tinnitus, focusing on that sound can help a person habituate to that experience. Habituation is the process of getting used to a sensation. We do so with many sights, sounds, and other sensory experiences, making it possible not to hold those sensations in our thoughts any longer.

Those who use meditation to deal with tinnitus find that they give less mental attention to their symptoms, experiencing them much like the sound of breathing or the feeling of the pulse through the body. Although it is possible to pay attention to that aspect of life, most of our time is spent without consciously focusing on that sensation. By intentionally focusing on tinnitus during meditation, many people feel relief after the session ends, and they are able to come to terms with this enduring feature of their lives.

In addition to habituation through meditation, we can offer other treatment options, including hearing aids and other devices that help to attenuate the sounds of tinnitus.

If you are curious to learn more, the best step is to make an appointment for a hearing test, because tinnitus is often associated with hearing loss, as well. When you consult with us, you can learn more about the variety of approaches to dealing with tinnitus, including the benefits of meditation.